So, where is everybody?

I traded in an old gold wing which I had decided was too heavy for me making it dangerous to loose balance
I added every single thing I could think of except the crash bars and the real cruise control....
I proclaimed it as my new light weight gold wing and proceeded to ride it all up and down the east coast
Gettysburg, Outer Banks, Gatlinburg, Massachusetts, Blue Ridge Parkway, etc....

cruisinTx said:
... what are your thoughts on the best version of the CTX700 for touring? As mentioned earlier, I have a lot of experience on bikes that includes some fairly long trips. I'm just wondering about the 700 as a touring machine; specifically what are preferences on luggage, windscreens and fairings.
Click to expand...

First off, welcome to the forum. Things have been quiet around here lately, but there are still a few of us around.

As you know, there are two models of the CTX700 -- one with a fairing, and one without, or naked as people like to describe them. I own a naked one, mostly because it was what the dealer had to sell, but also because I'm not a fan of the fairing-model's design.

Why am I not a big fan of the fairing model? Honestly, I think the big nose on it is ugly. But more troublesome was that I found my knees bashed into the fairing when I sat in the saddle ... and I'm only 5 foot 7.

So I own the N model. And, yes, I have toured with it ... but it has drawbacks, too, namely the lack of wind protection. The first thing I bought for "Flicker" was a windshield from MadStad Engineering; I'd done my homework and ordered the MadStad before I even took delivery of the bike. At the time (2014), MadStad was about the only supplier of windshields designed specifically for the CTX700 N model. Since then, several other manufacturers have come out with shields for the N model, and they seem to make some people happy -- and they look pretty good.

But, honestly, none of them are very wide. If, as I did, you're coming to the N model from a bike with a wider windshield -- the shield on my Victory Cross Roads was a barn door by comparison -- you'll find the MadStad shield leaves your shoulders out there to be pushed around at interstate speeds.

So I dug around in my garage, and found a set of windshield extenders from a previous cruiser, and slapped 'em onto the MadStad to make it wider. Darned if it didn't do the trick!!

I also dug out some simple handlebar wind deflectors that I had from my Victory and mounted 'em up. They simply attach to any 10MM mirror mount, so compatibility was no problem.

If you buy a fairing model, you'll have far more choices in windshields, plain and simple. It's the more popular model. And I know that fairing bikes give better wind protection overall. Part of me regrets not getting the fairing model ... but ow! My knees!

The next things I did to make my bike better for longer trips:
(A) Swapped the foot peg for floorboards -- this is done with adapters and boards from Kuryakyn (search, you'll find it described on the forum); and
(B) Sent my seat out to Russell Cycles in California for the Day-Long treatment. Best mod money I spent!! A lot of folks traded their stock seats for the Corbin seats, but I wanted complete customization, and Russell delivered.

I had my dealer install the Honda luggage rack before I took delivery. From a prior bike, I had both a Shad SH42 and SH48 universal hard trunk, which interchange on the same base. Mounted up with no problems.

I looked long and hard at the Honda OEM saddlebags, and decided they were pretty small for the money. I rigged up some other bags instead, at first temporarily using a set of throw-overs along with the "Closet Rod Mod" (search for it; there's a write-up), but eventually I hard-mounted some Edge Leather bags using mounting brackets that a guy from Texas designed and sold.

In 2014, Shad hadn't yet released its own brackets or luggage rack for the CTX700. If it had, I would have gone that way instead, to get the SH36 side bags, which are cavernous compared to the Honda OEM bags. (We don't have lane splitting here, so keeping the bike's profile narrow is not a necessity for me.) If I were to try and backtrack, and go that route, I'd have to remove the Honda OEM rack, because there's imperfect compatibility between Shad and Honda. Ugh.

Lastly, the Germany company Fehling came out with tipover bars that fit the N model, and I was able to cobble together "bar chaps" to fit on them that act like lowers. That helps my lower body manage wind blast, and I'm a happy camper. However, one can now also buy bolt-on lowers for either fairing or naked model from our friends at MadStad. It's nice to have choices.

The bike's a bunch of fun, and quite competent all-around, if you don't pretend it's a sport bike and you ride it accordingly.

The only place where I've found that it lacks a little in the touring department, at least for a solo rider like me (can't speak to two-up), is on the interstate over about 75 MPH. When I took Flicker to West Virginia for a week with my husband on his 1700 Vulcan and our friends on their Harley Ultra Classic, I kept having to drop a gear every so often to catch them going up loooong hills at 75+.

But once we got onto the twisties in the Allegheny National Forest, they had to work to keep up with ME!

Is any of this ramble any help to you?

Oh, and here's a few pictures of Flicker on various road trips. 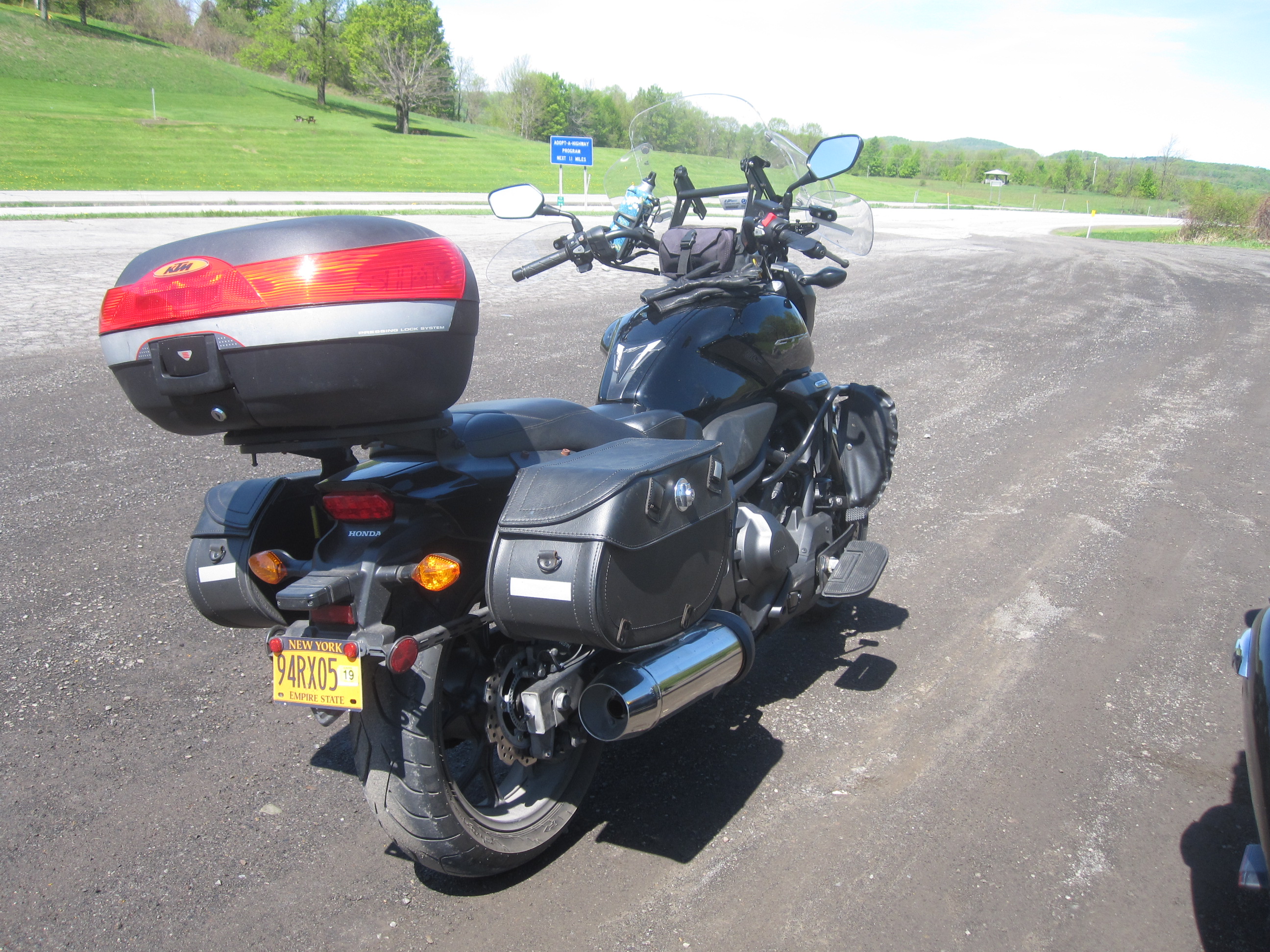 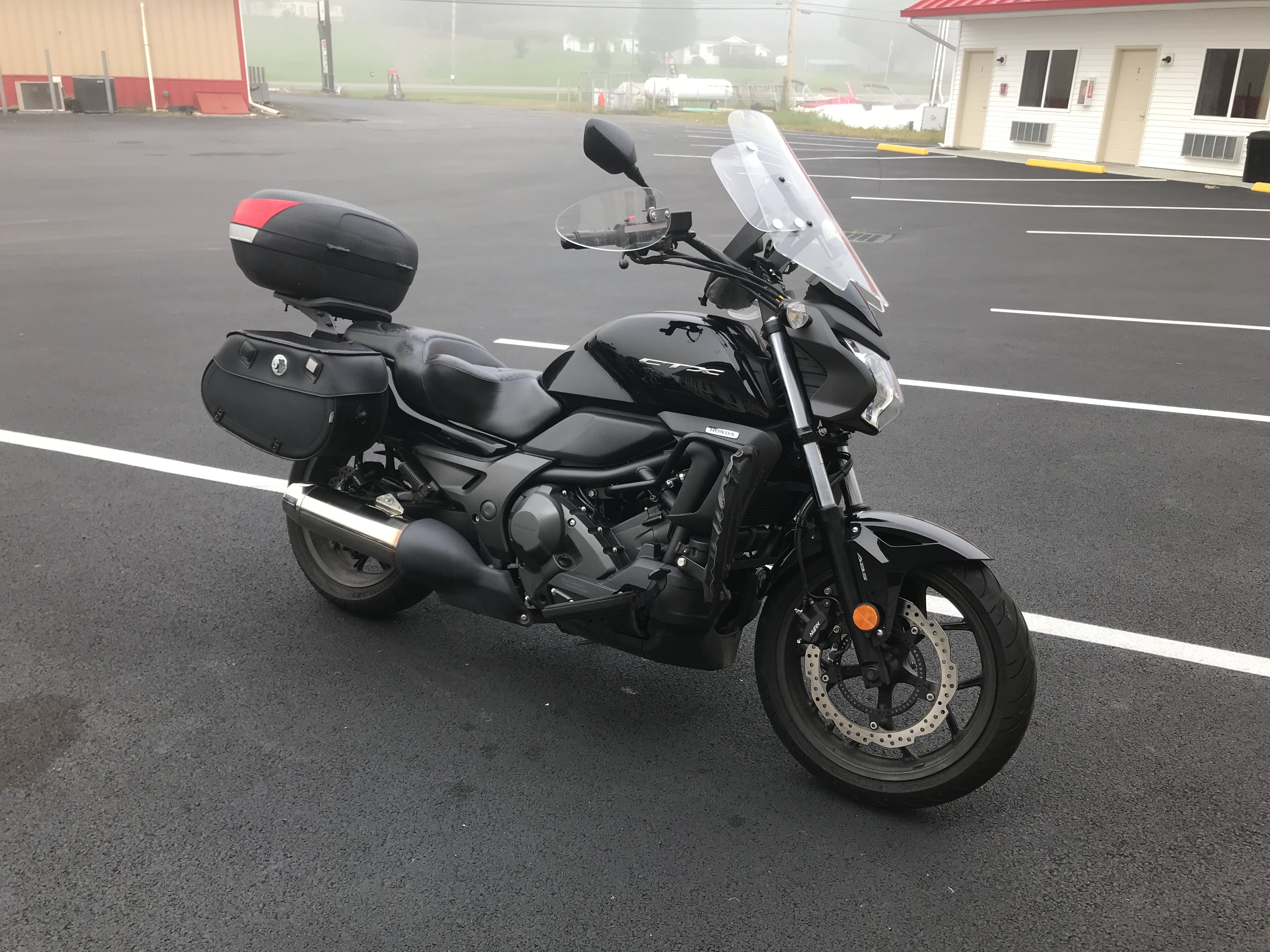 We get it, advertisements are annoying!

Sure, ad-blocking software does a great job at blocking ads, but it also blocks useful features of our website. For the best site experience please disable your AdBlocker.

I've Disabled AdBlock
No Thanks